Today marks the 60th anniversary of Ike Day, the star-studded celebration of President Eisenhower’s 66th birthday that was held in the midst of his re-election campaign.   Over ten years ago, I heard about this forgotten moment in American political history and started the research that led to Liking Ike. 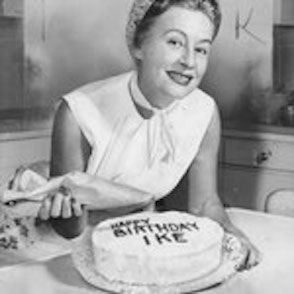 Time magazine has helped me commemorate the anniversary by publishing my reflection on Ike Day and the 2016 presidential campaign.  Here’s a sample:

Produced by the McCann-Erickson advertising agency and funded by some of the nation’s wealthiest families (the Rockefellers, DuPonts and Olins among them), the Ike Day program barely acknowledged its role in the presidential race. There was no talk of policy, no reference to political parties and no mention of Eisenhower’s Democratic opponent, Adlai Stevenson. And yet, to many in the press, the telecast struck a note of political genius. “As a demonstration of how to win friends and influence voters,” the Philadelphia Inquirer commented, the program “was worth dozens of speeches.” The Washington Post concluded, “without a single plea for partisan votes, it was the most politically effective program of the week.”  Continued at Time magazine.

And finally, for those of you who love cooking as much as history, you might be interested in Mamie Eisenhower’s special recipe for Ike’s Favorite Cake.  All over the country, volunteers baked cakes according to this recipe and brought them to Children’s hospitals, Veterans facilities, and nursing homes in honor of Ike.  I have not baked one of these myself, but as Carl Anthony illustrates, Mamie was well known for her elaborate cakes.