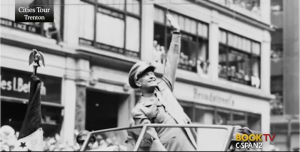 Thanks to C-SPAN for featuring Liking Ike on both its Cities Tour and Book TV programs. The producers put together a wonderful story on the book and its relevance to the 2016 presidential election. I especially appreciate the archival footage they included to back up our conversation.  Click here for the full video.

From The American Historical Review 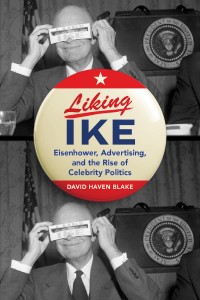 Liking Ike: Eisenhower, Advertising, and the Rise of Celebrity Politics

David Haven Blake’s compelling and convincing new book on American politics could not be better timed. In Liking Ike: Eisenhower, Advertising, and the Rise of Celebrity Politics, Blake examines the successful synthesis of advertising, celebrity, and television in the 1952 and 1956 presidential campaigns of Dwight D. “Ike” Eisenhower.  In these campaigns, the Republican Party engaged Madison Avenue advertising executives and deployed movie and musical stars to publicize and popularize the military commander as a political leader. Both advertising and celebrity politics had appeared in previous U.S. elections, as Blake and earlier scholars make clear, but their integration with the decade’s new medium of television in Eisenhower’s campaigns was innovative. This finding challenges the popular assumption that it was the Democratic Party that initiated the first “glamour candidate” with John F. Kennedy in 1960. . . .

[Blake’s] thorough analysis and contextualization draws on his research in a wealth of primary sources, which he marshals to achieve his aim of demonstrating the spectrum of American opinion on these developments. Engaging writing and a light touch with cultural theory add to the book’s merits. Altogether, Liking Ike productively expands our knowledge of the political past and our understanding of the political present.

[W]ell written and thoroughly researched….The book also has some significant contributions. First, it shows the influence and relevance of television, advertising, and celebrity status on the modern political system….Another strength…is its interdisciplinary content, which makes it a valuable volume for anyone interested in the presidency, politics, television history, advertising, public relations, and cultural history. In summary, this book adds a new hue to the existing historiography of presidential campaigns. It might even provide insight into the 2020 election and beyond. 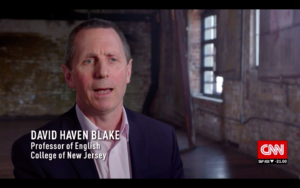 David Haven Blake’s study adds a new dimension to the literature of celebrity politics through examination of how advertising agencies crucially shaped its development in the 1950s….[T]his book is very deserving of attention from modern political historians, and not only those focused on the United States. The civic use of celebrity and the publicity it generates has permeated the modern body politic. The process may be most advanced in the United States but is not confined to that country. Historians would do well to consider Blake’s analysis of its genesis in the America of the 1950s and its attendant effort to use fame as a shroud to hide ideas and issues.

From Journal of American History

By studying the process by which politicians worked with experts from the advertising, public relations, and entertainment industries during a period of dramatic technological change, Liking Ike makes an important contribution to literature on the historical intersections of the media industry and politics. By asking substantial questions about the ‘production of celebrity politics,’ Blake has penned a significant history that does not simply lament the product of media change but also explains the complicated historical process by which political attitudes, cultural values, and social structures shaped and were shaped by television.

From Reviews in American History

Blake shows how advertising and television conspired to create a kind of perverse identity politics disconnected from real issues and resistant to the possibility that presidents can grow, evolve, or be anything other than the symbol they had become.

From History: The Journal of the Historical Association (UK)

[Liking Ike] is told from the perspective of both the White House and the various agencies that promoted the president. However, several chapters of the book use the Eisenhower years as a starting point to delve into other aspects of celebrity politics. 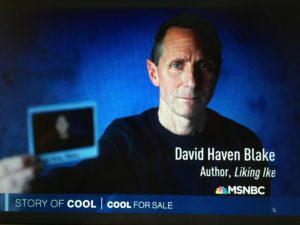 Indirectly we are provided with a general history of the relationship between media, advertising, celebrities and the presidency. . . . Blake’s research here is more interdisciplinary as he includes film and media studies, and this provides the reader with an extensive understanding of the significance of celebrity culture in this crucial decade. This excellent book is an important contribution to the study of politics and culture in the United States.

From Reviews in History

“Lively and entertaining . . . . an ambitious mix of political and cultural history”

Liking Ike makes an important contribution to our understanding of how modern politics has developed, particularly through the commodification of the presidency itself and the changing nature of Americans’ relationship to the concept of celebrity…

In a time of ongoing concerns over ‘fake news’ and potential Russian electoral interference, understanding the ways in political campaigns have developed and the willingness of candidates to exploit new technologies and techniques to influence voters by any means possible seems more important than ever. David Haven Blake has succeeded in producing a book that stands on its own terms as a significant piece of historical research, while also prompting the reader to consider how we choose our political leaders and the means by which the foundations of presidential images are created.

We would all do well, in this environment, to meditate on the story Blake tells and to begin to reimagine how our politics can be different going forward.

Long before the Donald and Facebook there were Ike and television. While many want to argue that the social media and Comedy Central merged politics, pop culture, and politics in the early 2000s, the roots of celebrity politics can be found in the 1950s. It is here that the rapid growth and emergence of television transformed presidential campaigns and elections from events that distanced candidates from the public to events that brought them into their homes. Rendering campaigns as entertainment variety shows, Blake describes how Eisenhower and his campaign staff were the first to understand that the power of linking candidates to celebrities and pop culture was the key to the new politics of television. The book describes the ways Hollywood and television made Eisenhower into a celebrity politician, how it set the stage for the selling of John Kennedy in the 1960 race, and the resulting modern-day national campaigns that are more image, personality, and media-based than they are substantive. A highly entertaining and informative book for collections on the media and American politics.  Highly recommended. All readership levels.

From The American Conservative

Though John F. Kennedy is often remembered as the man who first exploited the power of television, College of New Jersey professor David Haven Blake establishes that it was his presidential predecessor who was the real trailblazer. “Guided by television pioneers and Madison Avenue advertising executives whom insiders dubbed ‘Mad Men,’ he cultivated scores of famous supporters as a way of building the kind of broad-based support that had eluded Republicans for twenty years,” he writes. Liking Ike is the most comprehensive treatment yet of the ways in which the two Eisenhower presidential campaigns launched the commodification of American politicians. 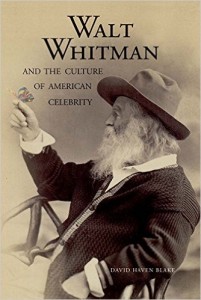 Whitman and the Culture of American Celebrity

Smart without being dense, clever without being smarmy, this cultural history is an engaging, at times eye-opening read. Blake, an English professor at the College of New Jersey, views Walt Whitman and his work in relation to the rise of celebrity culture in the nineteenth century-the time of Harriet Beecher Stowe, Fanny Fern, and PT Barnum-paying particular attention to the emerging ideas of publicity, promotion, and society’s changing conceptions of fame. But this isn’t the story of Whitman’s personal experience of fame; as Blake points out, that would make for a slim volume. Rather, he writes, “Whitman’s relation to American celebrity is a story about how the poet’s thinking responded to the culture he observed developing around him.” While the book is emphatically not a work of literary criticism, it nonetheless offers new and enjoyable ways of reading Whitman’s work, particularly when viewed through the prism of advertising and self-promotion. For example, according to Blake, the most significant antebellum advertisements came from the patent medicine trade, and “‘Song of Myself’ directly invokes the language of patent medicine advertising in describing the poet’s astonishing impact.” To the many critics and students who idolize Whitman, this may seem nothing short of blasphemous, but Blake insists this shouldn’t be the case: “Whitman’s immersion in publicity does not rival or compromise the aspects of his work that readers have praised since the nineteenth century.” Indeed, this enlightening study elevates all involved, especially the dubious legacy of that perennial beast, the American idol. 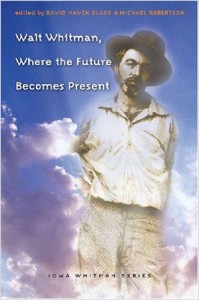 “This sterling collection of essays is well matched to its Whitmanian epigraph: ‘Past and present and future are not disjoined but joined.’ Their meeting point is reception, the myriad of ways that Leaves of Grass has been interpreted by readers from around the globe and across the generations or—in the words of Kirsten Silva Gruesz’s stunning closing essay—the ‘process of mutual adaptation across space and time’ that links the poetry to the world’s readers and cultures.”—Ezra Greenspan, Edmund and Louise Kahn Chair in Humanities, Southern Methodist University