Well . . . not exactly, but on the eve of its publication, Marshal Zeringue invited me to “dreamcast” a Liking Ike film for his terrific site Campaign for the American Reader.

Liking Ike centers on the personalities who helped promote Dwight Eisenhower’s campaigns for the presidency and his own ambivalence about the new worlds of television, advertising, and celebrity. The story lies in the remarkable set of characters, which makes casting especially fun. 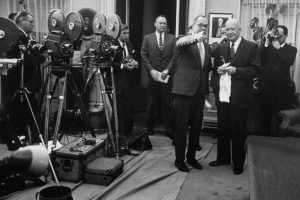 A general so conflicted about politics that he wants to be drafted to the Republican nomination rather than enter the race himself. Wary of the publicity machine and celebrities who campaign on his behalf, he nonetheless adjusts to the expectations of his Madison Avenue advisers. Intoxicated by the magical power of television, they boast that they want to “merchandise” Ike’s warm smile and personality.  My pick . . . Ed Harris

Continued at My Book, the Movie: