The Eisenhower Memorial Commission has recently released its latest “Pivotal Moment,” part of the E-memorial that will be included in its four-acre urban park at the base of Capitol Hill.  Titled “Winning the Presidency,” this seven-minute documentary is narrated by Tom Brokaw and features some excellent footage from the 1952 campaign. 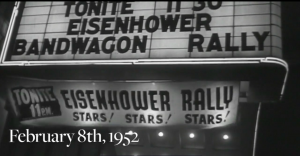 I was delighted to see this image from the “midnight rally” held at Madison Square Garden at the height of the Draft Eisenhower movement.  With Ike in Paris serving as Supreme Commander of NATO, the organizers turned to Stars! Stars! Stars! for political excitement.  Among the glamorous attendees were Clark Gable, Ethel Merman, Irving Berlin, Humphrey Bogart, and Lauren Bacall.  You can see “Winning the Presidency” and learn all about the work of the Eisenhower Memorial Commission at their website. For more on the rally (and to learn how Bogie and Bacall eventually rescinded their support for Eisenhower and backed his opponent, Adlai Stevenson), check out Liking Ike.