This weekend we celebrate the 160th anniversary of Herman Melville’s troubling novel The Confidence-Man; His Masquerade. Published on what was then called April Fool Day, the novel features a series of confidence tricks performed on a Mississippi River boat, named the Fidèle, on April 1 sometime in the 1850s. The Confidence-Man raises many questions 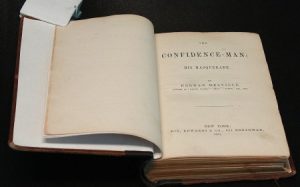 (for example, exactly how many con men are on board?), but each of the tricks depends on an expression of confidence in the world. When passengers question the con man or refuse to buy into his schemes, he urges them to open their hearts and speak with sincerity. “Ah, now,” he says in the guise of the buoyant Frank Goodman, “irony is so unjust: never could abide irony: something Satanic about irony. God defend me from Irony, and Satire, his bosom friend.” To state the obvious, Melville is winking at his reader. From its first paragraphs to its apocalyptic end, the novel provides a textbook example of irony: it says one thing and means another

Melville’s novel captures the ways in which Americans could reinvent themselves as they pushed further west. In the turbulence of the antebellum period, the Confidence Man urges his victims to look charitably on their fellow passengers and faithfully place their trust in him. When they resist, he accuses them of being faithless, of leading cynical lives, of disliking humanity and being misanthropes. 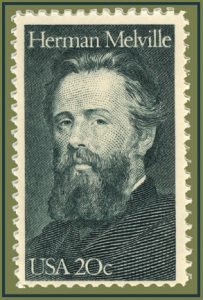 What makes the Confidence Man so successful is that he swindles his victims not only of their money, but of the skepticism and critical thinking they need to successfully navigate their lives.

The Confidence-Man is a difficult, problematic novel, one that unsettles its readers and gives them no footing in the text or the world. Nineteenth-century critics struggled to make sense of the book; “ineffably meaningless and trashy,” one reviewer called it, a “reckless perversion of high abilities,” wrote another.

160 years later, Melville’s probing and destabilizing novel may have found its time. As reports of fake news and paid internet trolls swirl around our digital frontier, as our leaders urge us not to question their actions and to place our trust in their hyperbolic vision of the world, The Confidence-Man is more urgent than ever, though the cause for that urgency would no doubt lead our great mariner to even deeper despair.