The Broadway Song That Nominated A President

The astounding success of Hamilton, its capacity to engage audiences from third graders to the president and first lady, reminds us that Broadway musicals have a healthy tradition of mining political history. From 1776 to Evita, songwriters have been fascinated by political power. What drives people to become leaders?  How do they rally supporters around them? What reservations do they have about their failures and successes? 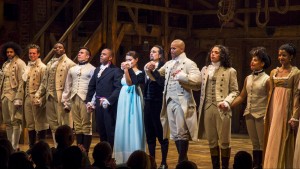 From costumes to choreography to the musical score, Broadway storytellers have amazing tools at their disposal, but as Lin-Manuel Miranda might agree, nothing attracts an audience like a tale of scrappy ambition carved out of the past.

Irving Berlin’s Call Me Madam stands the traditional partnership between politics and musical theater on its head. Although based on real life events, the musical played a special role in the making of American history. Long before Dwight Eisenhower had joined a political party, let alone agreed to run for office, Call Me Madam was advocating for an Eisenhower presidency, and evidence suggests that Berlin’s musical significantly contributed to his election. –